In 2019, Safari celebrates its 10th anniversary. Exactly 10 years ago, we opened the doors to our first guests. For the city by the sea located in the Ukrainian steppe Safari became a real diamond, in which it was possible not only to see exotic animals from different corners of our planet, but also just to have a wonderful time walking through the green and flowering alleys of the park.

Year after year, Safari grew, developed and built. Animals were getting bigger and many were having babies.

2014 gave the zoo two beautiful giraffes Tambu and Yaya. The girls heroically overcame the difficult path from the Czech Republic to Ukraine. Specially for them the giraffe was built, where they feel great at any time of the year.

In 2016, a white lion named Belushi became a real star of social networking sites in the zoo. In addition, the same year zebras from the Czech Republic and Slovakia came to us. And in general, 2016 became a turning point in the biography of our zoo, after 7 years after the opening, we were awarded the title "Best Zoo of Ukraine". And the world-renowned TripAdvisor resource, based on ratings and reviews from visitors, marked us with the Quality Certificate as the best place travelers recommend to visit in Berdyansk. We have become a hometown pride and business card.

In 2017, we began the construction of a multi-storey aviary - a summer residence for small primates, rodents and birds. Climbing to the top floor, you can see a bird's eye view of the Safari. In the same year, our Safari family is replenished with new small primates (toys and tamarins), a miniature kitten serval, a pair of blue-yellow macaws and a flock of pink flamingos.

In 2018, marsupials: kangaroos and wallabies arrived in Safari. In the same year, the white lioness Azira and the French became parents for the third time and for the third year in a row, breaking all hitherto known records for predators.

We have friendly relations with several dozen European zoos, making Safari a constant pleasure and surprise for new guests. It also plans to develop diplomatic relations outside Europe and across the Eurasian continent.

You will soon find out what the 10th anniversary year will bring us from our site pages and social networks:

Well, it's best to see with your own eyes.

We always welcome guests and work 356 days a year with no days off!

In March 2016 we were visited by two zebras from the Czech Republic, and then two more from Slovakia. And in the future we plan to merge with zebras giraffes on a vast territory, which is similar to their distant homeland in Africa.

In April 2016, seven years after opening we have been awarded the title "Best zoo in Ukraine" and became one of the business cards of his native city.

In August 2016 Safari was named the best place according to TripAdvisor rating that travelers should visit in Berdyansk. We got the Certificate of Quality based on high ratings and positive reviews of guests who have visited our zoo.

For seven years, the Zoo "Safari" added dozens of new species of animals from all over the world. We are in touch with 26 zoos in Europe, whose pets at one time moved to our Safari. Besides comfortable accommodation, contribute to the fact that we are constantly born babies. The same factor was the reason that Safari is now the largest population of predatory felines (lions and tigers) and Himalayan bears.

We are always glad to see visitors and our doors are open all year round and every day.

Welcome to the Safari! 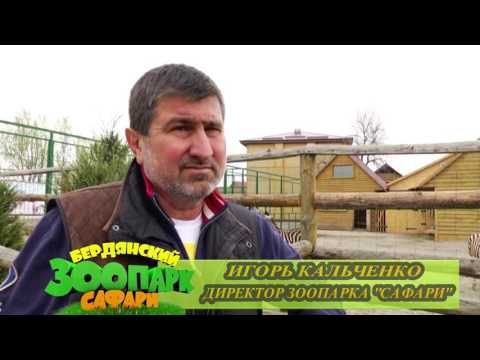 The award for quality

Thank you for rating! Member of the Ukrainian Association of Zoos and Aquariums (UAZA) Our Animals
Get ready be surprised! Subscription
Stay informed on our news